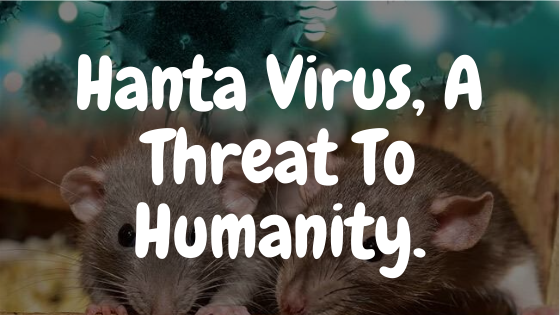 Hanta Virus, A Threat To Humanity

The world is still fighting to win over the novel virus COVID19, another deadly virus has been detected in china once again. people aren’t over the COVID19 thing yet, and one more virus has made things worse. Recently, a few days back on 22 march in Yunnan, death has been registered caused by this virus. This virus isn’t new for humanity but it has been infecting people for decades.  Let us learn more about the virus

Name of the virus Hantavirus(orthohantaviruses)

Hanta is a group of viruses that is perhaps carried by a few rodents. It is believed that some of these viruses cause a rare but deadly disease known as hantavirus pulmonary syndrome. It is a genus of single-stranded,  enveloped, negative-sense RNA viruses in the family Hantaviridae.

The existence of this virus was recognized as an infectious disease somewhere in the early 1950s in the united nations, where a clump of 3000 troops was infected by a peculiar disease in Korea. Around 10 to 15 percent of people died out of this disease, but the exact cause could not be ruled out for more than twenty years. Back then, it was suspected that rodents like cotton rats were the carriers of this mysterious virus to humans. Well, the first isolation case arose in 1964 in Vellore in India. Later, the Asian Hantavirus (HTNV) infected was isolated in 1978 that got transferred from a contaminated rodent that was named after the Han river in Korea because the rodent was found there. Well, the first outbreak of Hantavirus was recorded in 1993 in the southwestern united states out of some unknown pulmonary sickness. This area was shared by Arizona, New Mexico, Colorado and Utah later came to existence as The Four Corners. This incident rose the alarm because it was found to be a chain reaction between human to human. The man who got infected spread the infection to his fiancee as well. Both died respectively showing exact symptoms. Those who came in contact with the infected patients, showed similar symptoms within a week, which later helped doctors to rule out the cause and the virus.

There is a group of Hantavirus. These groups can cause Hantavirus PUlmonary syndrome. It is an infectious disease. It is spread by rodents like deer mouse and cotton mouse when they come in contact with human habitats. Surprisingly this virus doesn’t make these rodents sick, despite they prove life-threatening among humans. Once someone comes in contact with the infected air, food, droppings or drops of urine of these rodents, they get infected with Hantavirus.

Fever, fatigue, muscle ache, body ache, chills, dizziness, headache, nausea, vomiting, diarrhea, and abdominal pain, respiratory failure. During the early stages, the infection can be mistaken as the normal flu-like symptoms starting with a cough and cold. But if the symptoms persist for more than 10 days, the patient needs serious attention because falling short of breaths can be life-threatening.  It can be a Hantavirus infection.

The most chances of getting contaminated with Hantavirus are coming in to contact with rodent’s urine, droppings or by breathing into contaminated air. This majorly happens while cleaning enclosers where the presence of these creatures are mostly suspected. These places can be grain bins, cottages, garages, or our own home because huge places like this make easy for rodents to hide and habitat. So before getting into any such process make sure to

Unfortunately, there is no particular vaccine or medicine for this virus. If the infection is diagnosed in an early stage, the patient can receive intensive medical treatment that can improve its condition. Ignorance may prove life-threatening in any case. The best way of prevention is precaution itself.

11 Cool Garden Sheds You Can Put in Your Backyard

What to Look for In A Business Accounting Software

12 Skin Care Tips You Should Be Living By

Moving A Step Ahead For “Skilled Backyard Designing” Business