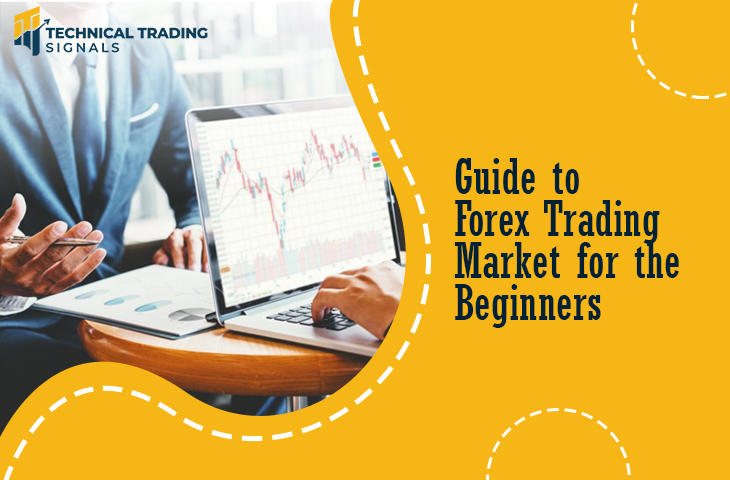 Complete Guide for the Beginners about Forex Trading Market

Forex, also called foreign exchange, is a financial market for changing one currency into another for several reasons such as – trading, tourism or commerce.

The foreign exchange market is where currencies can be traded by almost everyone throughout the world. Generally, currencies are exchanged in order to carry out foreign trade and business dealings.

One exclusive aspect of the Forex market is that there is no central marketplace for it. Hence, currency trading can be done electronically over-the-counter (OTC) so that all kinds of transactions are performed through computer networks between central banks, financial institutions and traders around the world, instead of a centralized exchange. The market remains open 24 hours a day, five and a half days a week, and currencies can be traded globally. Due to this reason, the Forex market seems to be very active during any time of the day with the price quotes constantly changing.

Just like stock markets that can trace the roots back to several centuries, the forex market is a relatively new market. This is all about people converting one currency to another for international trade, business dealings and financial benefit.

Both commercial and investment banks seem to carry out most of the trading in the forex markets for their clients. However, their opportunities for independent traders and investors to enter the Forex market and trade any currency pair available in the market through their brokers.

When people discuss the forex market, they generally refer to the spot market. Both the futures and forwards markets seem to be extremely popular with companies that have to hedge their foreign exchange dealings to a particular date in future. Make sure you know about the best Forex trading signals before investing in it.

More particularly, it is the spot market where currencies have been bought and sold based on their existing price. This price is generally determined by supply and demand which is the reflection of several things such as – the current rate of interest, sentiment for ongoing political situations both nationally and internationally, economic performance and overview of future performance of one currency against the other. Once a deal gets finalized, it is called a “spot deal.” This is a bilateral transaction in which one party has to deliver an agreed-upon currency amount to counterparty and gets a specified amount of another currency at the agreed-upon exchange rate value. When a position is closed, the settlement will be paid in cash.

Unlike the spot market, the futures and forwards markets do not conduct trade with actual currencies. Rather, they try to deal in contracts that denote claims to a specific type of currency, the specific price for each unit and future date for the settlement.

Contracts can be bought and sold OTC between the two parties in the forwards market that determine the clauses of the agreement between themselves.

On the other hand, in the futures market, futures contracts are usually bought and sold depending on a standard size and settlement date on different public commodities markets.

Both types of contracts seem to be binding and are generally settled for cash in exchange of question upon expiry, though the agreements can be bought and sold before they may expire. The forwards, as well as futures markets, provide protection against any kind of risk at the time of trading currencies. Usually, the big international corporations take help of the markets to hedge against exchange rate fluctuations in future, but the speculators take part in these markets too.

The companies that are conducting business in foreign countries are at greater risk due to fluctuations in the currency values when they buy or sell goods and services outside the domestic market. Foreign exchange markets offer a suitable option to hedge currency risk by fixing a rate at which the transactions can be completed.

In order to attain this, an entity may buy or sell currencies in the swap or forward markets in advance that seem to lock in an exchange rate.

This kind of hedging can be performed in the currency futures market. The major benefit for the trader is that futures contracts seem to be standardized and then cleared by a central authority. However, currency futures might be less liquid than forwarding markets that get decentralized and exist within the interbank system throughout the world.

Certain factors such as – interest rates, tourism, trade flows, economic strength and geopolitical risk can affect demand and supply for currencies that creates regular volatility into the forex markets. A suitable opportunity exists to make a profit from the changes that might increase or decrease one currency’s value as compared to the other. The prediction that one currency will get weakened is the same as assuming that other currency in the pair will strengthen since currencies can be traded in the form of pairs.

Currency in the form of an asset class

There are two specific features to currencies as an asset class:

Why it is possible to trade currencies

Currency trading had been extremely difficult for individual investors before the Internet. Most currency traders were large hedge funds, multinational corporations or high-net-worth individuals as forex trading required a huge amount of capital. With the help of the Internet, a retail market has aimed at individual traders that have emerged by giving easy access to foreign exchange markets, either through the brokers making a secondary market or banks themselves. Most online dealers or brokers provide a high amount of leverage to individual traders who can conduct large trades with the small account balance.

Trading currencies might be a bit risky and complex too. The interbank market includes different degrees of regulation, and forex instruments cannot be standardized. But forex trading is completely unregulated in certain parts of the world.

The interbank market is usually made up of banks trading with one another throughout the world. The banks need to know and accept credit risk and sovereign risk, and they have already set up internal processes to keep themselves in the safest possible way. Certain regulations of this type are industry-imposed for protecting each participating bank.

As the market is completely made by each participating bank that provides bids and offers for a specific currency, the market pricing mechanism is generally based on demand and supply. Since there are large trade flows within the system, it is quite difficult for traders to influence the currency’s price. The system can form transparency in the market for investors who have complete access to interbank dealing.

Most retail traders usually trade with small and semi-unregulated forex dealers and brokers who can re-quote the prices and trade against their own customers. Based on where the dealer remains, there can be some government and industry regulation, but those safeguards seem to be inconsistent around the world.

Most retail investors have to spend sufficient time in investigating a forex dealer to know whether it is regulated in their country. It is a good idea to find out what type of account protections is there during a market crisis or when a dealer becomes bankrupt.

Pros and Challenges of Forex trading for beginners

Pro: The forex markets seem to be the biggest for daily trading volume in the entire world and provide maximum liquidity.

This can be quite convenient to enter and exit a position in any major currencies within the fraction of a second for a small spread in the market conditions.

Challenge: Brokers, dealers and banks in the forex markets enable the higher amount of leverage which means traders may control large positions with lesser money of their own. The leverage should be within the range of 100:1 which seems to be a high ratio but not uncommon in the forex market. A trader needs to know the use of leverage and risks introduced by the leverage in an account. Extreme amounts of leverage seem to lead several dealers to turn insolvent suddenly.

Pro: The forex market has been doing trading 24 hours a day and five days a week.

Challenge: The trading currencies productively need an in-depth knowledge of economic indicators and fundamentals. A currency trader should have a big-picture understanding of the economies of different countries and their inter-connectedness to get hold of the fundamentals that have driven currency values.

The traders who have limited funds conduct swing trading or day trading in smaller amounts which is easier in the forex market than other markets. Those who have larger funds and longer-term horizons, the long-term fundamentals-based trading or a carry trade seem to be a profitable option. The entire focus is in knowing macroeconomic fundamentals that drive currency values and experience with technical analysis so that new forex traders can make a huge profit from it.