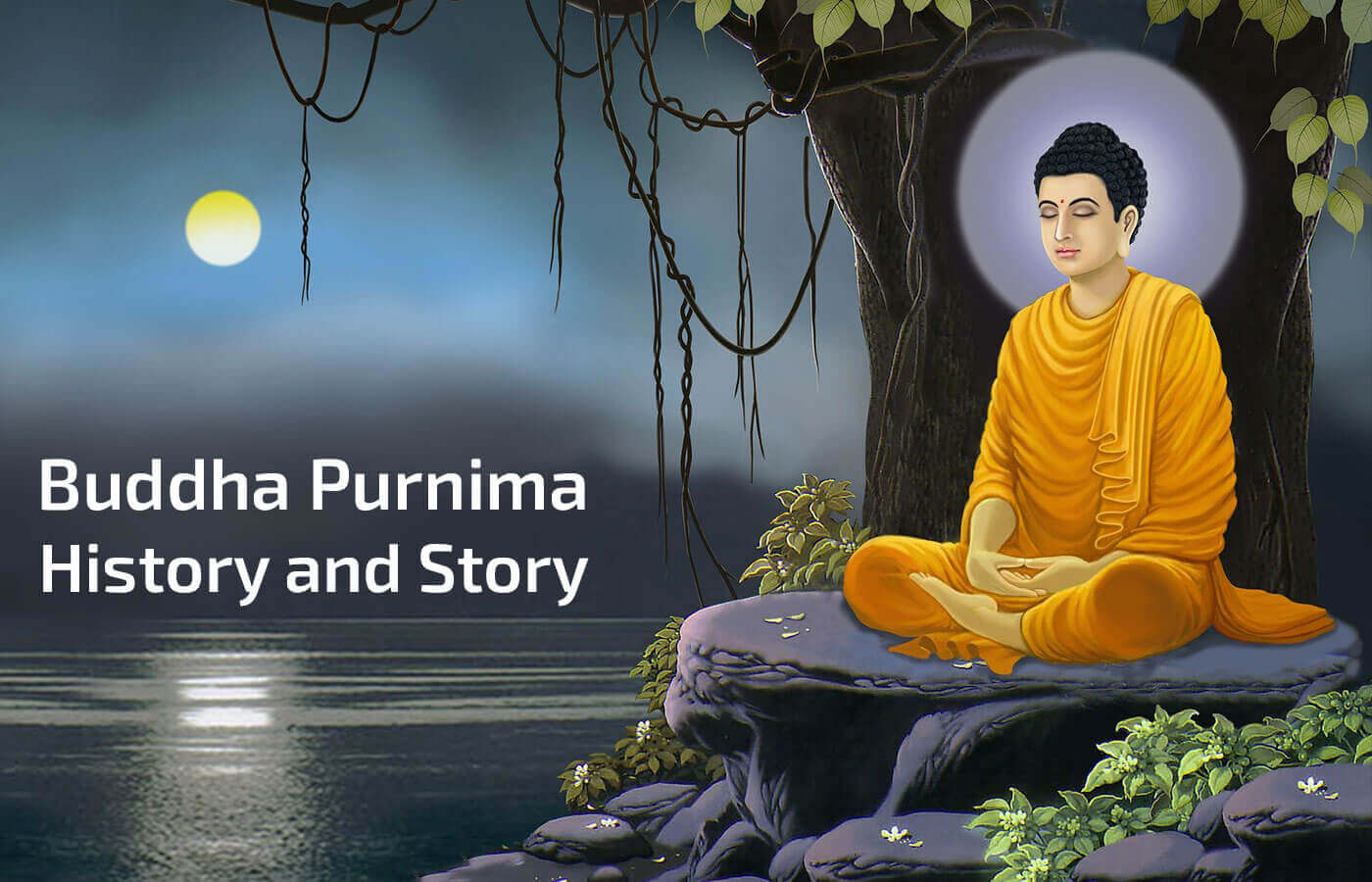 The coming Poornima is on 7th May and is celebrated worldwide as Buddha Poornima. Lord Buddha was born on this Poornima thus the auspiciousness of this day is increased immensely. Alternately, this Poornima is also known as Vesak Poornima in the South and Southeast Asian nations.

Buddha’s birth on this day somewhere between 563-480 BCE is confirmed to have taken place in Lumbini, according to the Theravada Tripitaka scriptures. The Prince lost his mother at birth and was raised by his aunt, in the Shakya capital of Kapilvastu, Nepal.

During this month the Dharma wheel symbol commonly comes up patronized once and for all, by King Ashoka.

Bhutan and Tibet are the only Buddhist nations and Bhutan and everywhere the Budha Poornima celebrations take this particular form.

All across the world, Budh Poornima is celebrated and the cleanliness of the place is worth watching. Thousands of devotees throng from everywhere to the holy place. The Buddha statue is bathed on this very day and food, flowers, and prayers are offered in plenty to them. Budh Poornima Celebrations can last several days in Bodhgaya. Needy and the poor are delivered food and belongings on this day.

How the daylong festival is celebrated?

Buddha Poornima is celebrated and the day usually begins before dawn.

1)  Prayers and chants begin before dawn and also some hymns are chanted during the early hours of the morning which offer mental peace.

2)  The Sunrise marks the hoisting of the Buddhist flags in temples and the modern Buddhist flags come from Bhutan and Sri Lanka. The primary colors used are blue, red, white, orange, and yellow colors.

Blue represents compassion and respect for all living beings.

Red symbolizes the ability to practice

White represents Dharma and its purity.

Yellow symbolizes the Middle Path or avoidance of extremes of all kinds.

3)  Buddhist temples on Budha Poornima cater to different activities during which the people pay some form of donations to the monasteries including donations and offerings of food.

4)  Caged animals are freed as part of the Budh Poornima celebrations in many parts of the country.

We would wish to see how Budh Poornima is celebrated across the entire world including India and Nepal.

The Budh Poornima national festival is celebrated all across the country especially in the regions of Sikkim, Ladakh, Arunachal Pradesh, Bodh Gaya, in the various parts of North Bengal like Kalimpong, Kurseong, Darjeeling, Maharashtra and the monasteries near Sanchi Stupa. Dharamsala in Himachal Pradesh houses the present Dalai Lama, the XIVth, Tenzing Gyatso.

Dr. B.R.Ambedkar initiated the declaration of Budh Poornima as a national holiday.

A “longer-than-usual –full-length Buddhist Sutra” is observed throughout the day.

White dresses are worn by people on this day.

Non-vegetarian food is normally avoided on this day.

Rice pudding is prepared on this day and usually fed to the devotees who come to the Buddhist Viharas and monasteries. Originally known as Buddha’s birthday, this day is commemorated as Buddha’s birthday, death day, and also the Nirvana day according to Theravada Buddhism. Dalai Lama, the 14th and the entire country of Tibet rest in India’s Dharamsala. Tibetans remember Buddha’s birthday on Saga Dawa month’s seventh day that commemorates the Buddha’s parinirvana along with Buddha Poornima celebrations.

For the Shakya clans of Newar, this festival is of immense importance. They are the clan of Buddha and are related to Buddha by birth. The festival is known as Swanya Punhi. This day not only commemorates his birthday but also commemorates the day of Enlightenment and the day of his Maha parinirvana.

Keeping in mind Buddha’s gentleness and serenity, the very nature of Buddhism, women go to “longer-than-usual-full length Buddhist Sutra” in pure white dresses and sweet rice porridge is eaten on this day. Thus, this festival is also known as Thrice Blessed Festival in the Nepalese and in Indian regions.

The minority Buddhist community comes together on this day. Buddhist monks and priests decorate the monasteries and Buddhist temples on this day all over Dhaka primarily. Flowers, candles, and color abound these clean temples, Buddhist Viharas, and monasteries. The President and Prime Minister of the country on the occasion of Budh Poornima celebration discuss peace and international brotherhood on this day. Fairs are held around the temples and people come together to celebrate these fairs. Food, clothes, and toys are part of the land. Buddhist congregations meet in a congressional and discuss the three jewels of living an ideal life. Everyone lights a candle and recites the three jewels and the Five Buddhist precepts.

Major attraction: Fairs are the main attraction of the day.

Prayers, flowers, chants are carried out throughout the day. This day is known as Vesak Borchea here in Cambodia. Elaborate prayers are a part of the Budh Poornima celebrations and the sweet smell of flowers and incense marks the day as special. Usually, the old custom of receiving alms and cooking food out of this begging bowl is practiced everywhere in Cambodia. Monks move out in the cities and collect alms from every household. People participate largely in this process of giving alms.

The monks carry prayer flags, lotus flowers, and light incense and candles as a symbol to mark this day everywhere.

Major attraction: Colorful flags are the main attraction of this day in Cambodia. Laos finds the rise of Buddhist flags fluttering everywhere in Laos and the periphery of Cambodia.

China remains home on this day, as this day marks a public holiday here in China. Buddha preached Buddhism to India and his ardent followers spread Buddhism to China and the nearby countries. There are innumerable Buddhist Viharas, Buddhist monasteries, and Buddhist temples all around the country. People usually gather together on these days and families sit around a mean after elaborate prayers, and some Chinese cults even practice fasting on this day. Lanterns are lit and bathing the Buddha seems to be the major rituals that mark this day.

Major attraction: Lanterns are lit in homes and decorated in different colors, floating lanterns float on the Hwang Ho all across the country, and flying lanterns rise high with the air and the wind takes them far.

Floating lanterns symbolize the soul floating through the river of life.

Flying lanterns symbolize the carrying of our wishes far from our homes and often people write their wishes in a chit that burns slowly and the ashes spread all across with the wind, leading to the belief that the Universe would come together to fulfill the wishes of those individuals.

Waisak is celebrated all across the country and it is a public holiday on this day. Apart from prayers and regular decorations, the day is typically marked by the huge procession that begins in Mendut in Java and ends in Borobudur. It is the largest temple in the world in Java and is beautifully decorated on the occasion of Budh Poornima celebrations.

Major attraction: The huge procession that crosses through every street is decorated with flowers and continuous prayers intend to purify the air.

Japanese call this day as Kanbutsu-e or Hanamatsuri and is celebrated on April 8th every year. Even Buddha’s birth is also celebrated but this day is not a national holiday. Flowers decorate all homes; women wear the national dress Kimono. Japanese pour a beverage called Ama-cha; a beverage made from Hydrangea plants and is poured on the small Buddha statues that are decorated with flowers on the occasion of Budh Poornima celebrations. The pouring of Ama-cha is similar to the Indian ritual of pouring milk on Lord Shiva’s status and often the resemblance is also drawn to the bathing ritual of a newborn baby.

This tradition of bathing Buddhist statues originated first in China and then was introduced to Japan in 606 when it was held in Japan for the first time.

Major attraction: It is the Lion dance that symbolizes the birth of a Lion in Buddha’s form who stood up against oppression and cruelty in the world.

In this country, the small community of Buddhist Malays come together and celebrate this beautiful festival. Floral decoration is one of the main attractions and usually, people pray prayers, chant hymns, worship their God, and also give alms in plenty. Buddhist temples across the country are beautifully decorated on the occasion of Budh Poornima celebrations.

Major attraction: The release of the caged animals that are set free on this day in bulks all across the nation. This is symbolic of setting our souls free on the occasion of Budh Poornima.

The Full Moon festival is known as Kason and chanting hymns, music and dance are performed all across the country. Flowers and incense are significant, and Buddha Poornima celebrations include music and dance.

Major attraction: Watering of the Bodhi tree and the chanting that happens all across the Buddhist pagodas.

Buddhist populations do celebrate it if they get a holiday on this day.

South Korea celebrates the Bodh Poornima and calls this day as Seokga tansinil or Bucheonim osin nal that means “the day when Buddha came.” Lotus lanterns are hung in the homes and the streets and on Buddha’s birth, temples arrange for free means and tea for all the devotees who visit the temple on this day. Usually breakfast and lunch are provided as “Sanchae bibimbap.”

Major attraction: Breakfast, lunch, and tea. Folk celebrations, including the Buddha lantern parade, are celebrated all across the nation and are witnessed by all in the world.

The Vesak is usually celebrated on the first Full Moon Day of the month of May, always determined by the Buddhist Lunar Calendar. Budh Poornima is celebrated with lit lanterns all across Sri Lanka.

Floating lanterns, bamboo framed lanterns, candles, and paper lanterns are lit all over the place. Dansal is the free offering of food and drink and Bakti Gee is a type of devotional song sung by the people on this day. Decorated gateways are created all across the nation and people usually bring offerings and incense to the pagodas and temples. Electric light is on the display on this day and Buddha’s life stories are put up through elaborate life shows, all over the place.

Buddha’s birthday is a national anniversary on this day.

Major attraction: People pour fragrant water that symbolizes the beginning of a new life on this day.

People gather together and wear their best dresses accumulating to donate and chant prayers on this particular day.

Pagodas all across the country are decorated and the birthday of Buddha is enjoyed by floating lanterns and by organizing lantern parades on streets in the evenings.

To conclude, we may say that Buddha Poornima is a day that teaches us the teachings of Buddha and that would include- peace, tolerance, universal brotherhood, compassion, and the middle path. We live for gaining everything in life, and we die for nothing. Buddhism teaches the path of Nirvana where you live for nothing and die for everything. The Buddhist philosophy including the three jewels or the three truths and the eightfold path is recited and learned by heart by every single individual who participates in the prayers. This festival is not alone for the Buddhists but also for those who believe that peace is the only response that can work its way through violence- the greater the violence, the greater has to be peace and understanding.